Australia
DOLLY was an Australian bimonthly teen magazine started in 1970 by Fairfax Ltd. in Australia and New Zealand, and purchased by ACP in 1988. The magazine became online-only publication and ceased the print edition in December 2016.

Dolly was the basis and inspiration for Sassy Magazine (1987–1996) in the United States. The magazine is aimed at teenage girls (13–17 age group) and covers celebrity news and gossip, fashion and beauty and various feature articles attractive to female teenagers and dealing with issues that are faced by this age group and gender. The magazine also has a website containing games, information on upcoming issues, quizzes and downloads. The magazine has now produced over 400 issues and as of 2007 has a readership of 505,000.

In the July 2014 issue, 5 Seconds of Summer were on the cover, had an interview and a photoshoot. 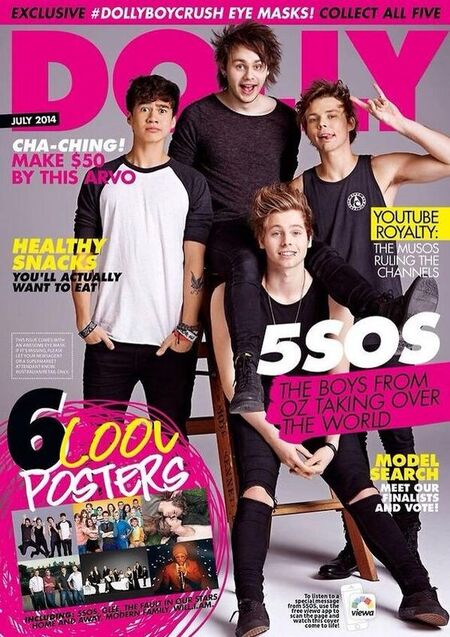 In the February 2015 issue, 5 Seconds of Summer were on the cover and had an interview, Michael, Luke, Ashton and Calum all spilled on girls, first dates and smooching! 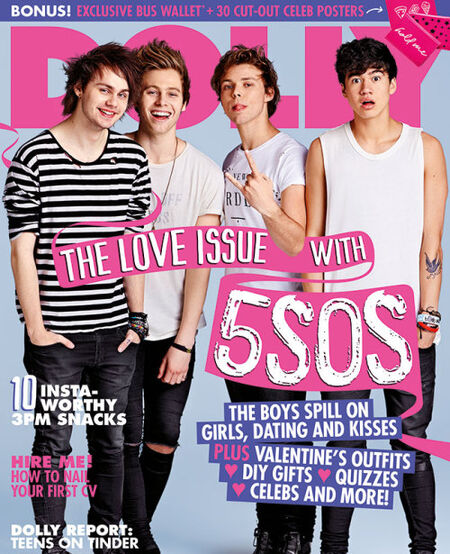 DO YOU KISS ON THE FIRST DATE?

ASHTON: “It’s a kiss on the cheek from me.”
MICHAEL: “I give them a big hug and then wait to see what she does next.”
CALUM: “It depends how the date goes, I think. If I really like a girl, I probably wouldn’t kiss her on the first date.”
LUKE: “It’d be a full-on smooch for me, definitely. For every date!”

WHAT QUALITIES DO YOU LOOK FOR IN A GIRLFRIEND?

CALUM: “I like a girl who’s quirky, funny and slightly weird. We’re weird guys, so it needs to be balanced out.”
LUKE: “[I want] a girl with good sense of humour who doesn’t take herself seriously. Australians are naturally sarcastic. Witty jokes work really well with me.”
ASHTON: “Character is very important for me, so I look for someone who’s  quite confident and interesting.”
MICHAEL: “My dream girl would be super funny, weird and caring! I don’t know if I’ve met her yet, but then again, maybe I have and just haven’t known it.”

LUKE: “Yes, I would date a fan. People talk about fans like they’re mystical creatures, but they’re just normal people.”
MICHAEL: “For sure, I’d definitely date a fan; it would be like dating someone who likes your music and that would be awesome.”
ASHTON: “Yeah, it’s a bonus if your girlfriend likes your music, definitely not a downfall.”
CALUM: “Yes, I agree with the boys. If they like our music, that would be a bonus.”

WHERE WOULD YOU TAKE A GIRL ON A VALENTINE’S DAY DATE?

ASHTON: “I like the beach at night-time. That’s one of my favourite places ever.”
MICHAEL: “I’d pick something like going to see Spider-Man at the movies.”