"Hi everyone, This book is pretty much our official story so far. It really does seem only like last week we played our first gig at the Annandale Hotel in Sydney. Since then we've been given the opportunity to turn into the people and musicians we wanted to be. The people who gave us the opportunity were the fans. So this book is like a thank-you. We want everyone to know the story of how four western Sydney teenagers picked up their instruments and dreamed of being one of the biggest bands in the world. There are also some embarrassing photos of us derping around and some facts that some of us didn't even know. So we hope you enjoy it! Love, cal, luke, ash, and mike x" [1] 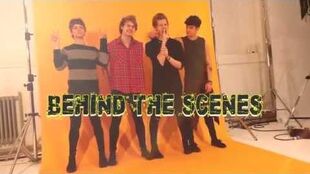 Retrieved from "https://5sos.fandom.com/wiki/Hey,_Let%27s_Make_a_Band!?oldid=18053"
Community content is available under CC-BY-SA unless otherwise noted.