The iHeartRadio Music Festival is a two-day music concert festival held each year in September since 2011 by iHeartRadio in Las Vegas, Nevada, United States.

The annual event has aired as a television special every year since its launch. In 2011 the event was televised by VH1, while every edition since 2012 has been broadcast by The CW.

According to Billboard, the main festival "showcases some of the most well-established artists in the genre" while the village showcases emerging artists.

The 2014 iHeartRadio Music Festival took place on September 19 and 20, 5 Seconds of Summer performed on the Daytime Village lineup. Before performing, the boys did a backstage Q&A.

The 2018 iHeartRadio Music Festival took place on September 21 and 22, 5 Seconds of Summer performed on the Daytime Village lineup. 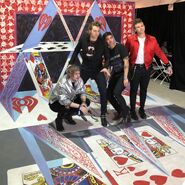