LiveSOS, usually stylized as LIVESOS, is the first live album by 5 Seconds of Summer. The album was released through Capitol Records and Hi or Hey Records on 15 December, 2014.

"Playing live has been something we have been the most passionate about from the beginning. All we want is for our fans to come to the shows, rock out and have one of the best times they've ever experienced. Also when a room is full of you guys from all different walks of life, you can let it go when you come to the shows and be free to be yourself. Our live album 'LIVESOS' is now available to preorder on iTunes or our webstore in the USA, Canada & Mexico. Everywhere else can from midnight this Sunday 23 October. It has 15 tracks recorded in different venues around the world! Anyways we love you, this is us live... You rule!" [1] 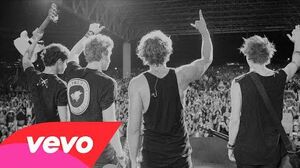 Retrieved from "https://5sos.fandom.com/wiki/LiveSOS?oldid=18507"
Community content is available under CC-BY-SA unless otherwise noted.