I think these four songs set the tone of what's to come, but it also shows off our influences and it explains the band musically. Everyone thought we were a bit more pop at times, but we are very rock oriented. It's fun for us, and it's the music we absolutely love and we're proud of it.[1] 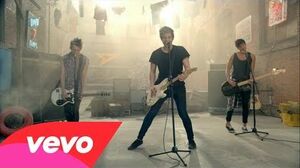 Retrieved from "https://5sos.fandom.com/wiki/She_Looks_So_Perfect_(EP)?oldid=18503"
Community content is available under CC-BY-SA unless otherwise noted.